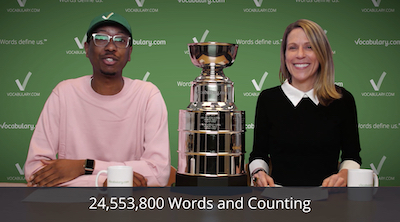 With just three months to go in the season, students competing in the Vocab Bowl are on track to hit the 40,000,000 words mastered mark and shatter several records along the way.

Schools are digging deep to put up big numbers as we start to eye the finish line on April 30th. In January alone, you mastered a collective total of  6,099,994 words — a whopping twenty-eight percent increase over January of 2019. That makes January's tally the highest monthly total on record, and brings us up to 24,553,800 words so far this season. With this kind of momentum, it's possible that every single month in the 2019–2020 season — that's October through April — will have new all-time high for words mastered.

Defending North American champ Etiwanda High School stepped on the gas to get back on top in January. The Eagles, who mastered just under 40,000 words in December, racked up 68,638 words to start the new year and win their 22nd champions banner. This wave of word learning widened their lead over Walnut Hills to almost 25,000 words.

Although Etiwanda and Walnut Hills have a tight grasp on first and second — at least for now — everything else is up for grabs in the High School Top Ten. As of January 31st, only a few thousand words separated third-place Mater Dei and Buckingham Charter. Hollywood Hills and Piscataway Township were fifth and sixth respectively, separated by fewer than 8,000 words. What's at stake? Bragging rights and banners! The Top Ten High Schools and Middle Schools will all be awarded hang-in-the-gym-worthy banners at the end of the season.

In Division II Great Neck North is way out in front, but it's a close race for second between Pines and Wheelersburg. The Division III race continues to be all about Buckingham and Ashe County Middle this year. The Bulldogs at Ashe county took a bite out of Buckingham's standing in October and November, but the Knights surged back to a 15,000 word lead in the last couple of months.

Get Your School Involved

The Vocabulary Bowl leaderboards are structured so that schools of every size can compete at the county, state and national level on a daily, weekly and monthly basis. In addition to awarding monthly champions banners to the top high school and the top middle school year-round, we also award banners to Division and State winners at the end of the academic season. This year's competition started on October 1st, so now is the perfect time to learn more and get your students signed up to play, compete, and learn in the Vocabulary Bowl.