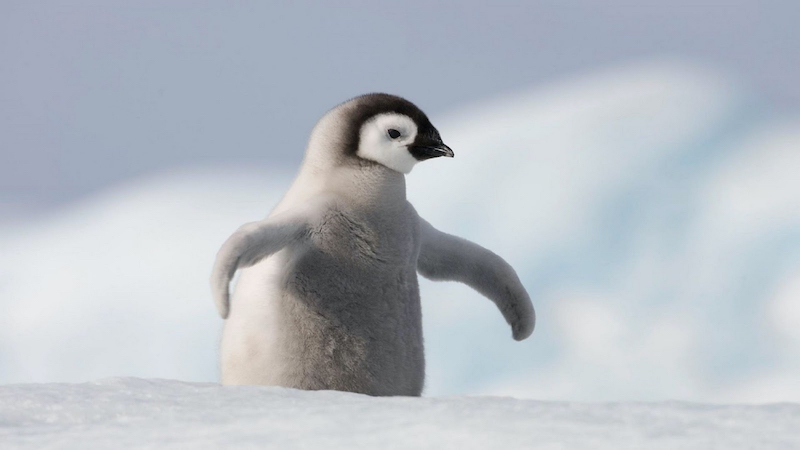 Did you know that January 20 is Penguin Awareness Day?

When was the first time you became aware of penguins? I must've seen one in the Buffalo Zoo as a wee lad, but I don't remember it. I probably first noticed the <i>appeal</i> of penguins reading the Bloom County comic strip as a lad — and I read it in smudgy, inky, <i>paper</i> newspapers like a caveman, whippersnappers.

Bloom County's character Opus the penguin, aside from one unfortunate incident involving an olive loaf and a mime, was a wholesome, adorable character. And in that way he is a perfect representation of his species: penguins are among the cutest critters in the whole gosh-darned world, so we should all take a moment to go "awwwww" on Penguin Awareness Day.

While the following words are perhaps not as adorable as actual penguins, I hope they gain your favor by association. Each word, in its own way, is penguin-riffic.

Learn the following words and more on this vocabulary list: Aquatic, Waddle, and Plumage: Penguin Parlance.

waddle
To waddle means to walk with short clumsy steps that make you swing unsteadily from side to side. That sense first appeared in the late 1500s, and by the early 1600s it was being used to describe the waddling of birds, especially ducks and geese. But penguins may be the ultimate waddlers, with their squat bodies and goofy gait.

aquatic
The Spanish word for water, aqua, is a clue to the meaning of this word, which refers to all things water-related — including aquatic birds like the penguin. Though unkind commenters may make fun of the penguin for its dorky waddling, it's a whole nother story when penguins swim: they absolutely fly through the water, thanks to their slick bodies and powerful flippers. Penguins are doofuses on land and Olympians in water. They are about as aquatic as a bird can get.

avian
Penguins are not your typical bird, whatever that is. A pigeon, I guess? But because penguins are birds, they can be described as avian. This term has popped up in English since the 1800s and comes from the Latin word avis, meaning "bird". That root influenced some bird-ish terms, such as aviation and aviator. Sadly, though penguins are avian, they are not aviators. You would not want a penguin piloting the plane on your next vacation.

plumage
Plumage, a term that is first recorded in the work of poet Geoffrey Chaucer, refers to a bird's feathers, but not a feather or two — the feathers as a whole. A penguin's plumage is generally a black and white pattern that makes it resemble a nun wearing a traditional habit, or someone wearing the next word.

tuxedo
A tuxedo — or tux for short — is a type of formal men's suit including a short jacket. No one would wear a tux to the zoo or burger joint. A tuxedo is also too fancy for a job interview: tuxes are reserved for the most formal of formal events. This is why penguins are always welcome at all proms, galas, and royal weddings.

emperor
An emperor is the ruler of an empire. If you've seen any of the bazillion Star Wars films, you're probably familiar with Emperor Palpatine, the evil space wizard who ruled the galaxy with an iron fist and blue lightning. But the term emperor has been applied to many animals as well — usually big or bright ones. There are emperor angelfish, emperor butterflies, emperor geese, emperor moths, and, yep, emperor penguins. The largest known penguin species has gone by that impressive name since at least 1844. FYI, these penguins are good fathers, as indicated by this use from The New Yorker in 2003: "During the Antarctic winter, male emperor penguins incubate the eggs containing their offspring, huddling together on the ice to conserve body heat."

posture
Posture refers to how people and animals carry themselves. If you sit slumped over, that's poor posture that will eventually wreak havoc on your back. If you sit and walk with a straight back, that's much better posture. If you're in an extremely formal or disciplined situation, like the military, your posture should be even more rigid. This word applies to penguins at times because they have very straight posture — they almost look like little people having a very important meeting, probably about ice or fish or cuteness.

macaroni
There are many meanings of macaroni other than the noodles you eat with cheese. One meaning turned up in the 1700s, referring to a dandy or fop: someone excessively concerned with fashion and style. Macaronis wore extravagant hairdos, and apparently someone thought their coiffure resembled the golden crest on the head of a type of penguin — which became macaroni penguins. By the way, this fancy sense of macaroni makes sense of the lyrics of the song Yankee Doodle Dandy: you could also call a colorful decorative object like a feather a macaroni.

You are now fluent in penguinese, so get thee to an aquarium or Antarctica or a Bloom County comic strip — anywhere  you can practice your penguin parlance.

Mark Peters is a language columnist, lexicographer, and humorist who has written for Esquire, The Funny Times, New Scientist, Psychology Today, Salon, and Slate. He contributes to OUPblog and writes the Best Joke Ever column for McSweeney's. You can read Mark's own jokes on Twitter, such as, "I play by my own rules, which is probably why no one comes to my board game parties anymore."

Click here to read other articles by Mark Peters